... I gave this tile by Rob Ryan to the Pal. At the time, it seemed to sum up so many changes in our lives and the excitement of moving forward. It has moved from his house, to our house and (unbeknownst to me) became inspiration for a very sneaky plan.
Last Friday morning, I awoke to a cryptic phone text message from a 'Wise Old Owl' which set me off on hours of treasure hunting. First, I found some balloons with a key attached at my front door and these led me to lots more puzzles in our apartment. Find-a-words and a CD where I had to use the titles and artists to break a code (I love a good puzzle!) had me searching high and low for more clues throughout our apartment (one was even in the freezer!). The last clue told me to pack a bag for somewhere cold - this becomes important later - to leave it in the apartment and to catch the 9:22am ferry into the city.
What greeted me on the walk to the ferry were countless signs, chalk arrows and red helium balloons tied to fence posts from my house all the way down to the wharf - it was like I was in a dream. I kept searching around to see if any friends were hidden around, but it was just me. 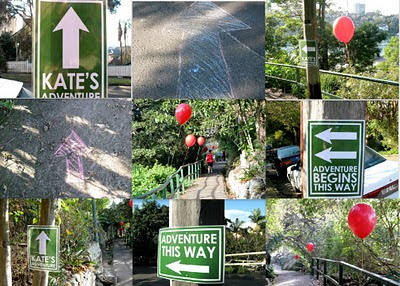 I was crying as I took these photos - and people walking up from the ferry kept saying, "Who's Kate? What adventure?!" When I finally got down to the wharf, the outside and inside were covered with pages spelling out quotes from my favourite books. By now, I was really, really crying... 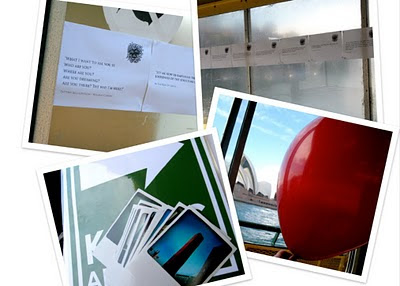 When I got inside the ferry, I received another message from the Wise Old Owl, telling me that there was another clue attached to a helium balloon inside. Inside this clue were more polaroids of city landmarks - places I had to search for further! Here are the photos: Just as I was beginning to doubt my directional capabilities, I got off the ferry and to my astonishment saw more green signs - they were everywhere!! Happily guided along by my green friends, I wandered through the city, utterly speechless (although still crying at this stage). 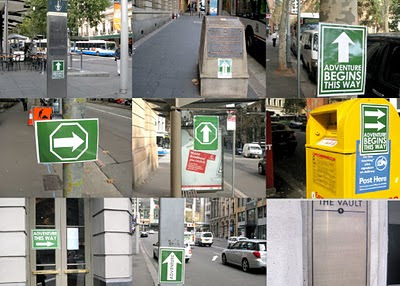 The arrows led me to The Vault, a fancy safety deposit box facility where I thought the Pal might meet me... Instead, I used my key which was delivered to my door that morning to open a box to uncover an ipod shuffle loaded with some songs by one of my favourite artists, and a boarding pass to Hobart. Alongside these was the instruction to walk to the InterContinental Hotel and pick up my bag in order to go to the airport!
I walked to the hotel, (wondering how my bag had even got there in the first place!) crying even more, if possible, and asked for my bag, which emerged attached to more helium balloons and another envelope clue. It said to tear up my previous boarding pass, and use another one to fly to Hamilton Island!
By this stage, I was certain that the adventure would end there. But when I arrived at Hamilton Island, I saw a woman holding a green Kate's Adventure sign, and the Pal wasn't in sight! She took me on a bus to a helipad where, no joke, I got on a helicopter, despite the pilot giving me no clues as to our destination. (That's me in the attractive life jacket below in the top left). We left Hamilton Island and flew low over the Whitsundays, pulling in at a tiny beach with huts, and (you can see it in the middle below) a MASSIVE sign in the sand reading 'Adventure' with a huge arrow. 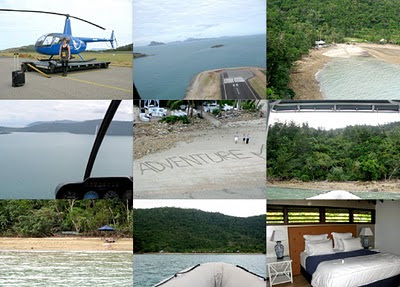 As I got off the helicopter (felt a little like I was in Tropic Thunder for a minute, then remembered I was in a tropical version of Amelie), the lovely staff buzzed around me, grabbed my luggage, gave me another envelope with a clue and told me to keep following the signs. I went down to the beach where I saw a boat come towards me. Just as I thought that this couldn't possibly be real, the captain said, 'Hi Kate!' and told me to get on board.
We zoomed out away from the resort, and even though we were in pristine bushland, large 'Kate's Adventure' signs were roped around rocks and trees all along the way! We pulled into a small beach, and the captain of the boat told me to stand up at the bow as we pulled into the beach.
The Pal was waiting there with champagne on ice, a cheese plate and, on the beach in the middle of nowhere, asked me to marry him.
And I said yes! 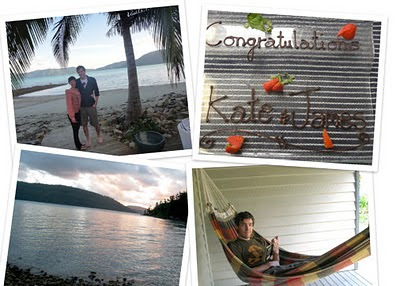 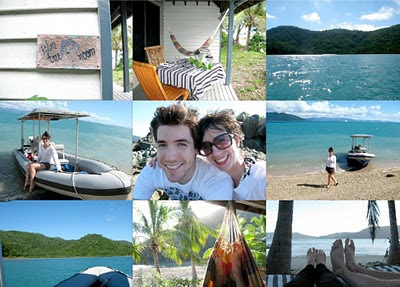 One of our dearest friends who was integral to the whole plan stuck this on our door for our arrival home, and planted chocolates and champagne in our apartment, too.
Thank you to everyone who helped in this intricate Amelie-style proposal - it was so incredibly extraordinary - and I am so excited! Kate
A space for shiny things. I like to blog about pretty homes and stuff and occasionally craft things, too.

The 4-Hour Workweek
by Timothy Ferriss

Fantastic Beasts and Where to Find Them
by J.K. Rowling

Designing Your Life: Build a Life that Works for You
by William Burnett

The Portable Veblen
by Elizabeth Mckenzie

Hillbilly Elegy: A Memoir of a Family and Culture in Crisis
by J.D. Vance

The Stench of Honolulu: A Tropical Adventure
by Jack Handey

You Know Me Well
by Nina LaCour

Everything I Never Told You
by Celeste Ng

Today Will Be Different
by Maria Semple

Here I Am
by Jonathan Safran Foer

The Wife Drought
by Annabel Crabb

The Girls
by Emma Cline 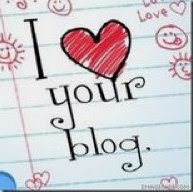 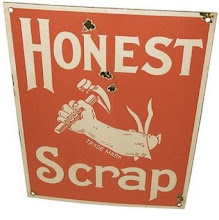 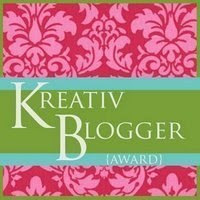 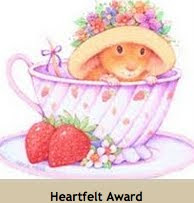 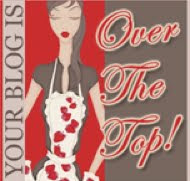